Good afternoon. I just received the Christmas care package my folks sent from Germany on November 30th, which included a tin of cookies, individually wrapped, that I have to share with you (if only visually):

Good afternoon! No, those aren't just five random words strung together in the title for this post. The lovely people at Design Indaba Magazine asked me to design the cover for their Wonder-Lust issue with an ardent Monster. They also included a very kind (and beautifully designed) article about what I do. If you happen to be in South Africa, or have access to a well-stocked international newsstand, please check it out!

My great thanks to Ravi, Matthew, Nadine, Richard, and Marcel at Design Indaba for letting me play! Needless to say 344 LOVES YOU

Hello there! Just a quick sign of life from your friend in the ink business. Forgive me for being so un-posty these days. More Monsters are in the works, but right now I'm typing away furiously on a new book for Spring 2011 -- monsterless, but still funny, hopefully. In other words, I'm a lazy blogger, but not a lazy person, and I hope you'll stay tuned! And if you've forgotten, which I'd certainly understand, please let me remind you that 344 LOVES YOU

In the meantime, it's spring outside:

Three new Monsters live from Design Indaba in Cape Town, South Africa. You can click on the drawing for a larger view. More Daily Monsters to come after I get back into the office next week. See you all soon! 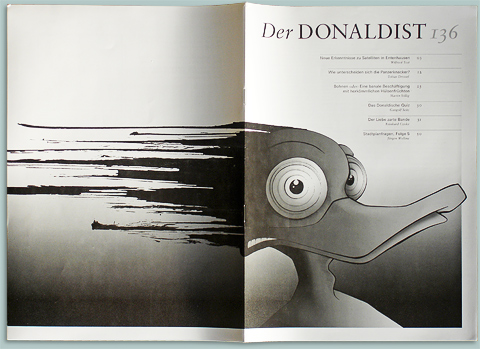 Good evening. As if you haven't had enough from me today, considering the Daily Monster™ Papers No. 15, and the first of the New Year's Eve Monsters, here is a little something that just arrived in the mail:

I was honored to design and illustrate issue 136 of the German science journal Der Donaldist. Now, just in case you're not familiar with this, allow me to explain: Donaldism is the scientific study of the universe occupied by Donald Duck -- Donald, Daisy, his nephews, Scrooge McDuck, the lot. We're not talking comic book collecting, either. The Donaldists are a group of writers, philosophers and scientists of every stripe (professors, applied physicists, journalists and judges among them) that have spent the last 32 years analyzing the available source material -- the canonical work of Carl Barks -- to formulate theories about the laws of physics and rules of society in Duckburgh.

They explained the scatter-shot nature of entropy in the duck universe, dealt with the phenomenon known as Veronkelung (literally uncle-ing -- there are only aunts and uncles, never parents), and they explained how ducks can have teeth when they're happy or angry. (Turns out that it's erectile tissue that pops up in emotionally heightened states.)

You'll be shocked -- shocked -- to learn that I was once one of them.

Back in 1985, thanks to my then brand-new friend Elke Imberger, Der Donaldist was the first magazine to ever publish one of my drawings. Issue 54, page 40, bottom left. I was 12 and I was hooked! 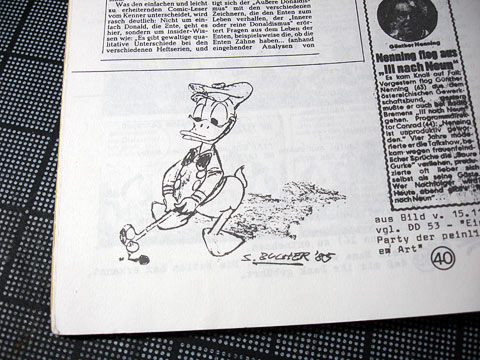 Since then I've designed a few of their covers, like issue 94 below, and the poster for their 2000 National Congress in Marburg (entitled M2K), and actually brought the National Congress to my hometown of Rinteln in 1989, driving the town fathers to complete distraction. So if you thought I was a nerd now, boy oh boy, you should've seen me then... 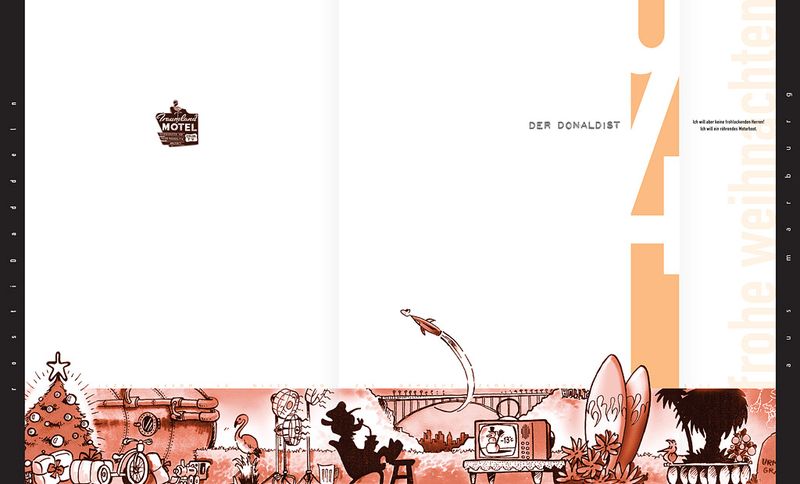 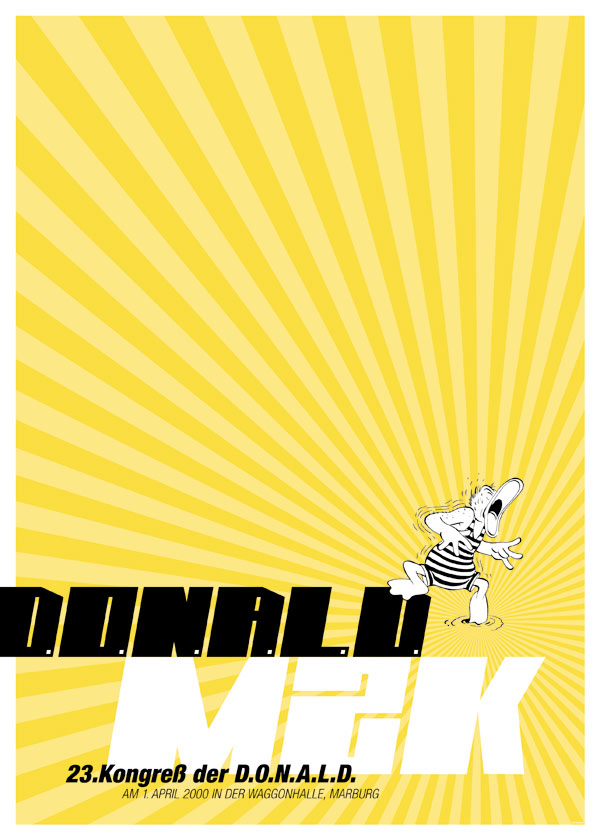 Incidentally, the font on this poster is German Bold Italic by Towa Tei that shipped with the excellent album Sound Museum. How could it be anything else? That drawing is by Carl Barks, by the way.

This cover marks my 25 year anniversary with the Donaldists. Good timing, don't you think? If you like, you can click on the image below to download a 1920 x 1200 pixel desktop image of the cover, with a handy white bar on the right for your icons. 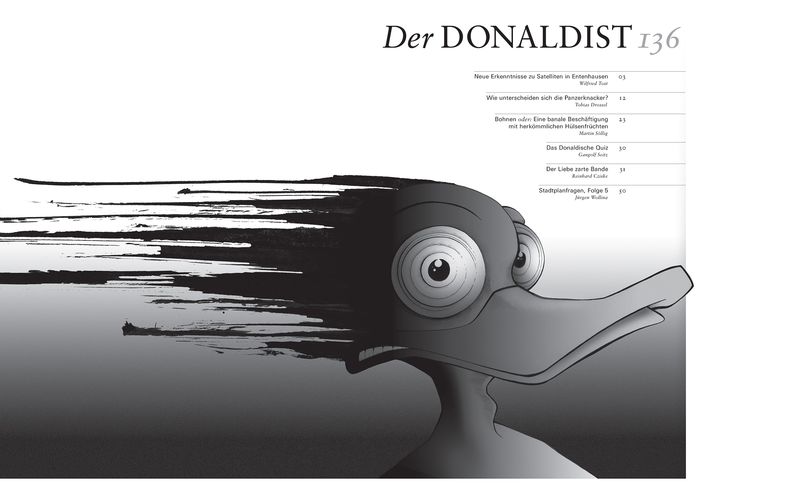 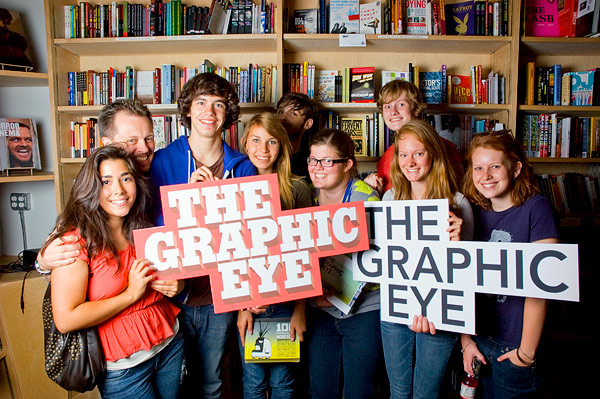 Good morning. Thanks to the valiant efforts of Tim Moraitis and Jennie Meredith, and with some lighting help from Jona Frank, I'm happy to present to you photos from the launch party for my new book THE GRAPHIC EYE -- Photographs By Graphic Designers From Around The Globe. We got together at the beautiful Skylight Books annex in Los Feliz, California, last Friday night, and as you can see by clicking here, we had a great time!

I'll also add a few photos by Friend of the 344 Empire Dyana Valentine to give you an impression of the space. Thank you to all of you who came to visit, to Tim, Jennie, Jona, Dyana, Linda, Michael, and Scott for taking great photos of the event, to Maria and Steve at Skylight for organizing such a great night, and to Gustavo for spinning excellent photography themed tunes.

More things are in the work and on the way. For now, I hope you'll have a great weekend, safe in the knowledge that 344 LOVES YOU 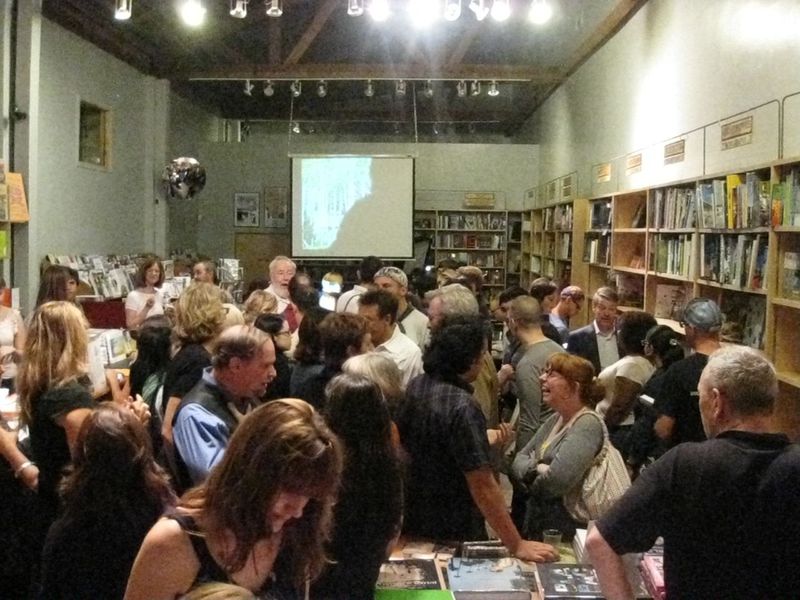 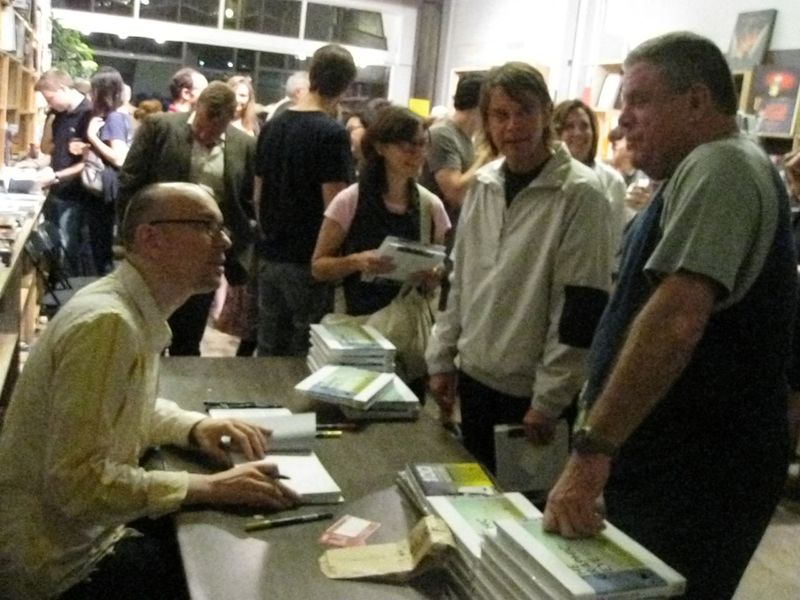 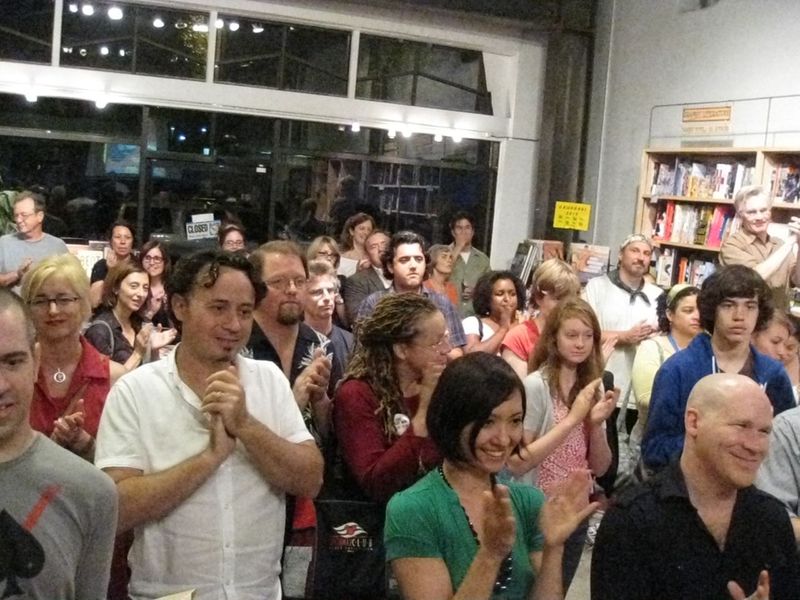 Good morning. How are you? I hope you had a lovely extended Memorial Day weekend. To ease your return to work for the short week I thought I'd show you the Monsters I made on the plane last week.  When I make Monsters there are occasionally ink blots that don't reveal their Monster to me right away. I save those, and when I fly I sometimes take a few, so I can draw on the plane. (The TSA frowns on compressed air cans in your carry-on luggage, so fresh ink isn't on the menu.)

Last week I flew to Columbus, Ohio to give a talk for the good people of the CSCA. It was kind of a big night for me, because it marked the end of the 344 Regional Domination Tour that started at the Y Conference in San Diego back in April of 2005 and has taken me to Washington DC, Chicago, Austin, Boston, a vacation resort outside Brainerd, DeKalb, back to San Diego, Portland, Cincinnati, Las Vegas, Louisville, Tucson, Phoenix, San Diego again, a ranch in Texas, New York, Denver, Orcas Island, Minneapolis, Seward, Jacksonville, Boston again, Orlando, Baltimore, Pittsburgh, DC again, Oklahoma City, and now finally Columbus, Ohio. Add to that a handful of events here in Los Angeles. It's been an absolute privilege to meet so many brilliant people at these talks, and a lot of fun, too. But I've decided to take a little break from the presenting, so I can make some new things to show you by the time I go out on the road again. That said, I'll be speaking at the AIGA National Conference in Memphis in October. It'll be short, that one, but it'll be good.

In the meantime, Columbus was excellent, and I had a great time. Jeff Seslar took some great photos of the evening (including the one above) and we filmed the whole thing, too, so I'll put up a few clips sometime soon. If you're ever in Columbus and you can swing it, I highly recommend you stay at the German Village Guesthouse. I'm not in the habit of giving plugs to the hotels I stay at, but this is a designer-owned, designer-run operation and I just went nuts for their garden.

But I'm getting off topic. Sorry. Planes. Monsters. I made six of them on this trip. This first one came through on flight AA 642 from Dallas to Columbus: 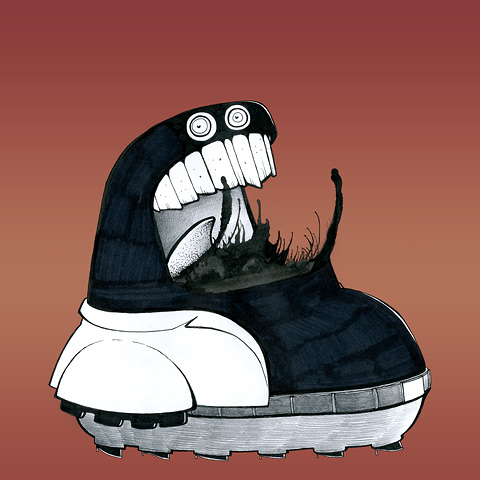 The second one started on that same flight, but had to wait until flight AA162 from Columbus to Dallas two days later to get some texture on its feet and some bark on its branch: 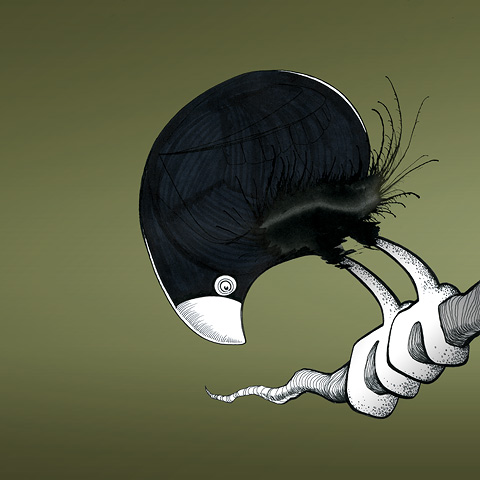 Monster No.3 came out on that same flight and was directly inspired by a young passenger two rows behind me, and another one in front of me and to the left. He's now also available as a Monster Onesie on Zazzle. 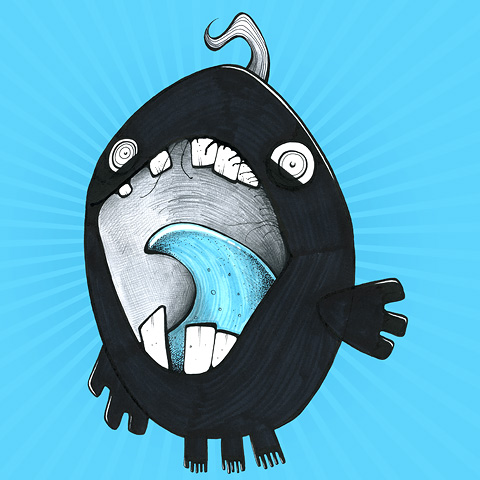 Flight AA 1677 from Dallas to Burbank started with this slender creature looking over the horizon: 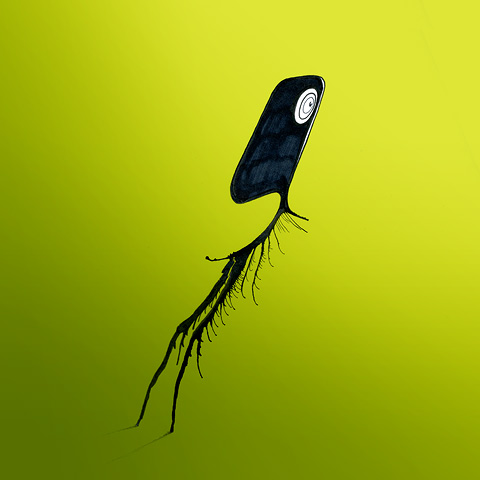 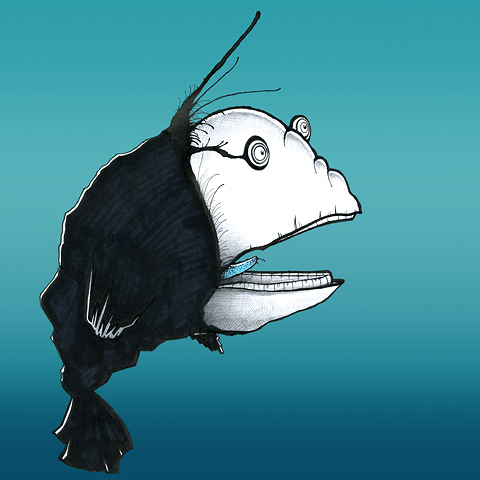 Lastly, just minutes before the cabin crew made me close up shop, this friendly little bird came to rest on my tray table: 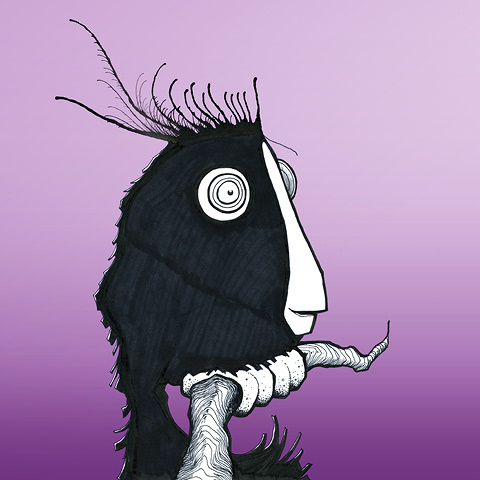 So there you go: Four productive flight segments, don't you think? I was happy the Monsters kept me company, and I hope you like our new friends here, too. (If you like, you can send them to your friends on Facebook using the SEND A MONSTER app.) Also, I don't think I have to remind you that 344 LOVES YOU 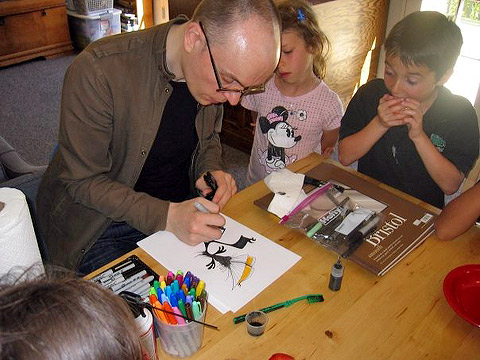 A few days ago I taught the kids in Dru Hardy's art class how to make Monsters. In the process I made a few of my own. Here's the first one, with only a little bit of Photoshop thrown in just for fun. You can click on the image to see a bigger version, you can click here to see some of the amazing animations the kids have done in other parts of the class, and you don't have to click anywhere to know that 344 LOVES YOU 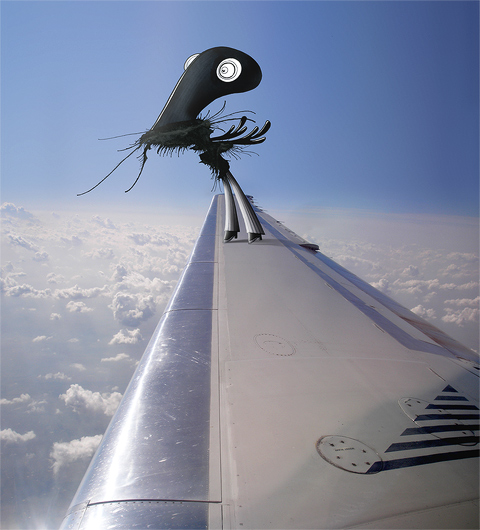 Good morning. How are you? Once again it's been far too long since I've posted new Monsters for you. The past month was mad with work. Allow me to give you a quick recap. If you're reading my Facebook updates, please forgive me for any duplications.

Two days before posting the Y Conference Monster I was sworn in as a United States citizen. This is something that I've been working towards since I first came to this country 15 years ago, and in earnest since getting out of school in late 1996. It's been a weight on my soul over the years and it was an incredible relief to have it finally and definitely removed. Here's a picture from the ceremony: 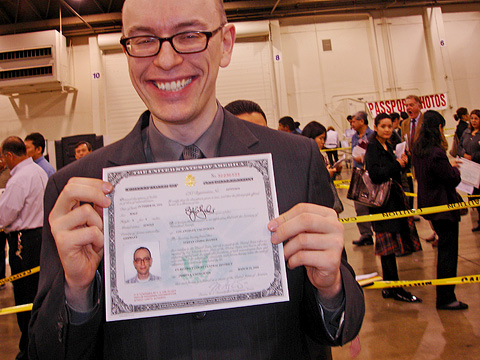 As part of the ceremony I was able to register to vote, which I did eagerly and joyfully. Stefan G. Bucher, registered Democrat. Pleased to meet you. Later in the week I called my congressman to support caps on greenhouse gasses, and in a few weeks I'll vote in the California special election. It'll be the first time I'm voting in any election anywhere, and I can't wait. 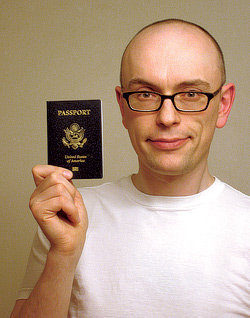 Yesterday I received my U.S. passport. Which is a pretty nifty thing to get in the mail. Hard to imagine that an administrative act could bring so much peace and calm to a life. Nice to be a citizen of the land I call home again after all this time.

Since my Oathening I've given an iChat lecture to the students at Missouri's Truman State University, been interviewed in Pash's UCLA Extension class, and spent a few days in Oklahoma City to give a guest crit at the University of Central Oklahoma and a lecture for AIGA Oklahoma. Oh, and I also finished my new book The Graphic Eye -- Photographs by Graphic Designers From Around the Globe to be published this fall by by RotoVision in Great Britain and by Chronicle Books here in the U.S. Here's an exclusive look at the U.S. cover: 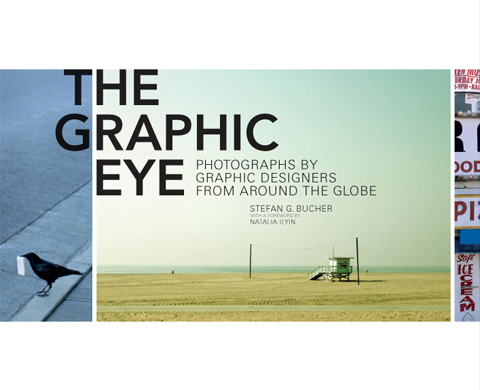 So I've kept busy. So busy, in fact, that I made five new Monsters and didn't even take the time to post them here on the blog. Which is just ludicrous. I'll put them up in separate posts in a few minutes. For now, I owe you one other item that I've neglected to post since forever.

Back in November, the good folks at Metro L.A. invited me to illustrate two months for their 2009 calendar. Needless to say, I love public transportation, and our very own Metro in particular, because the graphics and the stations all look extremely sharp, so it was a pleasure to pitch in. Check out the results: 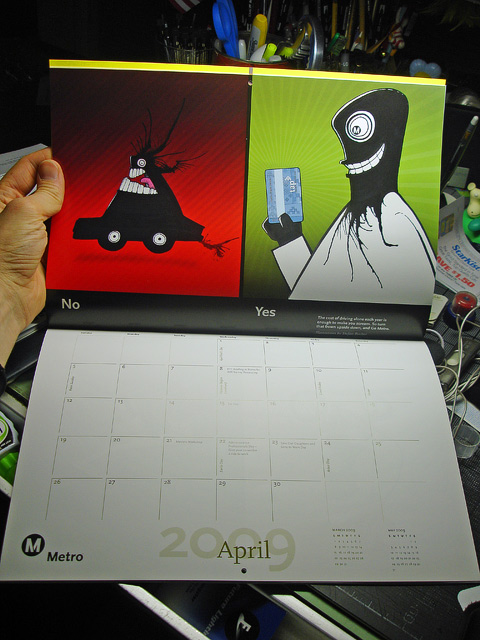 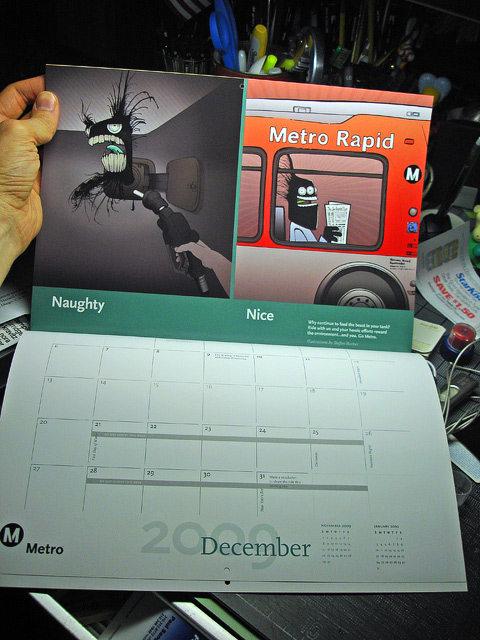 I'm so sorry to have fallen far behind in my blogging once again. I hope to better myself. As always, many new things are in the works, but one constant remains: 344 LOVES YOU 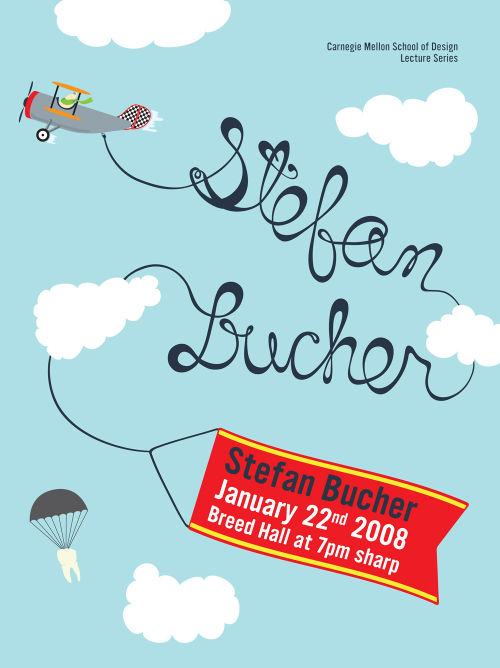